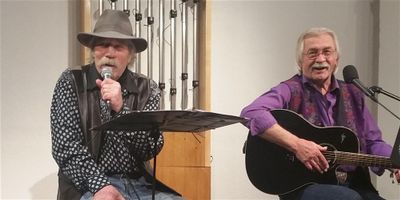 The World lost Waylon Jennings on February 13th, 2002. His outstanding musical legacy as One of America’s Greatest Musicians & Songwriters, including his tenure with The Highwaymen along with Johnny Cash, Kris Kristofferson & Willie Nelson, his induction into the Country Music Hall of Fame and the posthumous receipt of the Cliffie Stone Pioneer Award he received by the Academy of Country Music is undisputed.

In Tribute to The Life and Times of Waylon Jennings, locally-renowned Musicians & Storytellers Taelen Thomas and Bill Sparkman will be performing on Valentine’s Day, Friday February 14th at 5:00 p.m. at The Lab at 3728 The Barnyard Suite G-23 (Second Floor) in Carmel.

Bill Sparkman began performing outlaw country music while serving as a Marine during the Vietnam Conflict. Taelen Thomas is known as a Master Orator, Historian and Story-Teller with the exceptional ability to bring stories and people to life. The Duo’s knowledge of over sixty of Jennings’ songs with well-researched anecdotes about Jennings’ life will raise this rare performance to a living documentary.